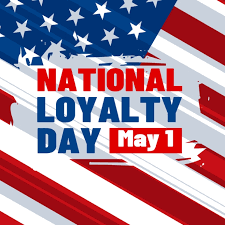 Loyalty Day originally began as “Americanization Day” in 1921 as a counter to the Communists’ May 1 celebration of the Russian Revolution. On May 1, 1930, 10,000 VFW members staged a rally at New York’s Union Square to promote patriotism. Through a resolution adopted in 1949, May 1 evolved into Loyalty Day. Observances began in 1950 on April 28 and climaxed May 1 when more than five million people across the nation held rallies. In New York City, more than 100,000 people rallied for America. In 1958 Congress enacted Public Law 529 proclaiming Loyalty Day a permanent fixture on the nation’s calendar.